A mission to educate is at the heart of RiverTrek program

 A mission to educate is at the heart of RiverTrek program By Evan Carden, SA Editor 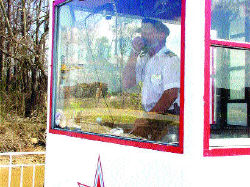 Capt. Mike Hosemann talks with a towboat operator shortly after pulling away from the Jackson landing for a one-hour cruise up the Tombigbee River.

The Chattanooga Star riverboat is the heart and soul of the RiverTrek educational program and the Hosemann brothers are its heartbeat.

Since its visit to Jackson one year ago, the Star has traveled some 10,000 miles and has carried approximately 13,000 children on school cruises and between 6,000 and 7,000 people on public cruises. It served as the official boat for Ohio’s bicentennial celebration, visiting 13 cities across the state.

"Our main focus is on economically depressed areas where many children may never get the chance to ride an authentic side-paddlewheel riverboat," said Capt. Mike Hosemann, who founded RiverTrek in 1998 with his brother Capt. Pete Hosemann. 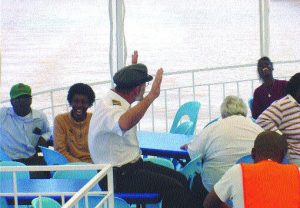 Capt. Mike enjoys talking with passengers during the cruises.

The two follow a family tradition of a life on the nation’s rivers. Their father, John Hosemann was a riverboat captain on the Tennessee, Mississippi and Arkansas rivers. Prior to beginning the RiverTrek program, the brothers worked in different areas of the southeast, piloting boats and doing marine surveys.

The first RiverTrek was organized from Columbus, Miss., where they were based at the time. It began as a spring/summer program, that became full-time two years later, when both men decided to take a cut in pay and devote themselves to doing something they love.

"People don’t realize the importance of our waterways," said Hosemann. "There was a time when our nation’s rivers were its highways. Today, farmers and other industries depend on rivers to get their products to the world," he added. 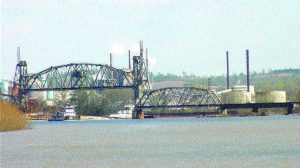 The railroad bridge across the Tombigbee River from above the Jackson landing.

Hosemann pointed out to the importance of the Tennessee-Tombigbee Waterway, which was completed in the early 1980s. "If not for the Ten-Tom, many farmers would have lost a huge amount of money because of the 1988 drought, which caused the Mississippi to become too shallow for ships to navigate," he said. "River traffic was diverted up the Tenn-Tom, allowing oil to continue to be delivered to the interior of our nation and saving farmers’ harvests from rotting in their silos."

More recently, a shipping accident at the mouth of the Mississippi River caused shipping traffic to be diverted up the Ten-Tom. "That’s twice the waterway has come to the nation’s rescue," Hosemann said.

"There is a movement by environmentalists to reduce commercial traffic on our rivers and stop dredging practices," he added. "If people in local communities along these waterways don’t keep pressure on Congress to keep them open, such a move will have a huge economic impact on this country."

Hosemann also pointed out that Jackson is an international port that serves several industries along the Tombigbee River. "Boise receives a good portion of its raw materials by river barge and Alabama Electric Corporation (AEC) gets huge amounts of coal for its steam plant the same way," he said. "One barge can carry the same amount of coal it would take 60 tractor-trailer rigs to deliver."

Hosemann added that the use of rivers to transport goods reduces highway congestion by reducing the number of trucks on the road, as well as providing jobs for local people and water for communities. "The water you use in your homes here in Jackson comes from this river," he said.

These points are integrated into the lectures the Hosemann brothers give on their school and public cruises in an attempt to educate children and adults about the country’s rivers. "That’s what this is all about," said Hosemann. "We want to expose the young people to one of the most important natural resources in their midst. After all, they are our future, so it is vital that they realize the impact rivers have on our daily lives."

The Chattanooga Star will be docked in Jackson through Saturday. Members of the public who wish to experience the Tombigbee River can take a 1-hour cruise at 2 p.m. and 4 p.m., Saturday. Admission is $8 for adults and $6 for children. The boat is licensed to carry 145 passengers.

"Come on out and enjoy the river with us," urged Hosemann.